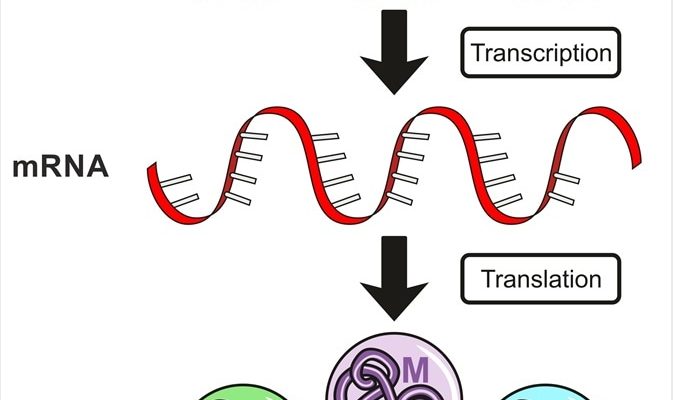 Gene, unit of hereditary information that occupies a fixed position (locus) on a chromosome. Genes achieve their effects by directing protein synthesis. In eukaryotes (such as animals, plants, and fungi), genes are contained within the cell nucleus.

Mitochondria (in animals) and chloroplasts (in plants) also contain small subsets of genes other than genes found in the nucleus. In prokaryotes (organisms that lack a differentiated nucleus, such as bacteria), genes are contained on a single chromosome that floats freely in the cell cytoplasm. Many bacteria also contain plasmids, extrachromosomal genetic elements with a small number of genes.

The number of genes in an organism’s genome (the complete set of chromosomes) varies significantly between species. For example, while the human genome contains between 20,000 and 25,000 genes, the genome of the bacterium Escherichia coli O157:H7 harbours precisely 5,416 genes. Arabidopsis thaliana, the first plant from which a complete genome sequence was recovered, has approximately 25,500 genes; its genome is one of the smallest known for plants. Among the extant organisms that replicate independently, the bacterium Mycoplasma genitalium has the fewest genes, only 517.

Genes are made of deoxyribonucleic acid (DNA), except in some viruses, which have genes that consist of a closely related compound called ribonucleic acid (RNA). A DNA molecule is made up of two strands of nucleotides that twist around each other to resemble a twisted ladder. The sides of the ladder are made up of sugars and phosphates, and the rungs are made up of bonded pairs of nitrogenous bases. These bases are adenine (A), guanine (G), cytosine (C), and thymine (T).

An A in one chain joins a T in the other (thus forming an A–T ladder rung); similarly, a C on one chain joins a G on the other. If the bonds between the bases are broken, the two strands uncoil and free nucleotides within the cell stick to the exposed bases of the now separated strands. Free nucleotides line up along each strand according to the base-pairing rule: A joins T, C joins G. This process results in the creation of two identical DNA molecules from one. original and is the method by which hereditary information is transmitted. from one generation of cells to the next. 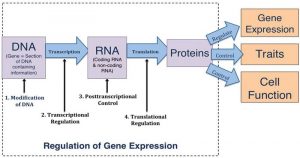 By gene expression, we mean the transcription of a gene into mRNA and its subsequent translation into protein. Gene expression is primarily controlled at the transcriptional level, largely as a result of protein binding to specific sites on DNA. In 1965, Francois Jacob, Jacques Monod, and Andre Lwoff shared the Nobel Prize in medicine for their work supporting the idea that control of enzyme levels in cells is regulated by DNA transcription.

It occurs through the regulation of transcription, which can be induced or repressed. These researchers proposed that enzyme production is controlled by an “operon,” which consists of a series of related genes on the chromosome consisting of an operator, a promoter, a regulatory gene, and structural genes.

The operator gene is the nontranscribable DNA sequence that is the binding site of the repressor. There is also a regulatory gene, which codes for the synthesis of a repressor molecule that binds to the operator.